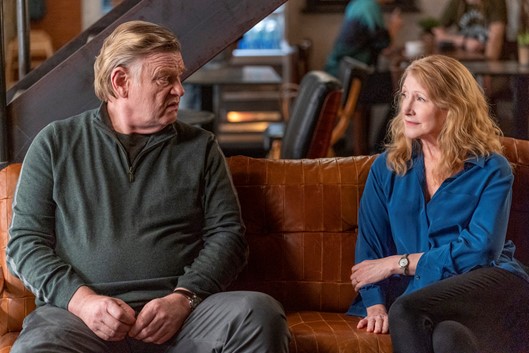 NEW YORK/LOS ANGELES – December 15, 2021 – SundanceTV today announced that the second installment of the multiple Emmy® Award-winning anthology drama, State of the Union, starring Brendan Gleeson (The Tragedy of Macbeth, In Bruges), Patricia Clarkson (Sharp Objects) and Esco Jouléy (High Maintenance), will premiere on Monday, February 14 on SundanceTV, Sundance Now and AMC+. The groundbreaking short form series will unfold across 10 episodes, each 10 minutes in length, over 10 nights starting February 14 at 10:00 pm E.T./9c on SundanceTV. All episodes will also premiere as a full season binge on AMC Networks’ streaming services Sundance Now and AMC+.

State of the Union will see the return of award-winning writer/director duo Nick Hornby (Brooklyn, An Education) and Stephen Frears (The Queen, A Very English Scandal) as they continue to cleverly explore relationships and the human experience. In this season, liberal campaigning Ellen (Clarkson) drags her traditional, self-made husband Scott (Gleeson) out of his comfort zone and into a hipster Connecticut coffee shop, where they have 10 minutes before their marriage counselling session to drink a coffee, gather their thoughts and argue about everything from Quakerism to pronouns. Each week, between the bickering, they begin to piece together what has gone wrong between them. As the weeks go by, they start to deconstruct their 30-year marriage. Past betrayals are aired, their sex life is re-examined, and their vulnerabilities are finally shared. By the end of 10 weeks of marital counselling, they’re not the same couple they used to be, but is making a change enough to save their marriage, or should they walk away?

Cast bios, headshots and photos are available via the AMCN Press Center.

A See-Saw Films production. Jamie Laurenson, Hakan Kousetta, Iain Canning, and Emile Sherman are executive producers along with Hornby and Frears, with Sophie Reynolds producing the series for See-Saw Films. Kristin Jones, EVP of international programming for AMC and SundanceTV, is the executive in charge for SundanceTV. Endeavor Content is handling international sales.

Since its launch in 1996, SundanceTV has remained true to founder Robert Redford’s mission to celebrate creativity and distinctive storytelling through unique voices and narratives found in the best independent films. From delivering critically acclaimed Emmy®, Golden Globe® and Peabody Award-winning television featuring some of the world’s most talented creators and performers, to showcasing some of the most compelling and iconic films across genres and generations, SundanceTV is a smart and thought-provoking entertainment destination.  SundanceTV is owned and operated by AMC Networks Inc.; its sister networks include AMC, IFC, BBC America and WE tv. SundanceTV is available across all platforms, including on-air, online at www.sundancetv.com, on demand and mobile.

Sundance Now can be enjoyed for $6.99/month or $4.99/month with an annual membership. No cable subscription is needed. Facebook: @SundanceNow – Twitter: @sundance_now

See-Saw’s television division kicked off with the multi-award winning first season of Jane Campion’s ‘Top of the Lake’. Campion returned with ‘Top of The Lake: China Girl’ starring Elisabeth Moss, Nicole Kidman and Gwendoline Christie which premiered at the 2017 Cannes Film Festival and was nominated for a Golden Globe.  ‘State of the Union,’ written by Nick Hornby, directed by Stephen Frears and starring Rosamund Pike and Chris O’Dowd had its world premiere at the Sundance Film Festival 2019 and won three Emmy Awards. Recent projects include Samantha Strauss’ ‘The End’ for Foxtel and Sky Atlantic, starring Harriet Walter and Frances O’Connor. Upcoming projects include ‘The North Water’ for BBC Two written and directed by Andrew Haigh, starring Colin Farrell, Jack O’Connell and Stephen Graham; ‘Slow Horses’ for Apple TV+, starring Gary Oldman, Jack Lowden and Kristin Scott Thomas; and ‘The Essex Serpent’ for Apple TV+, directed by Clio Barnard.