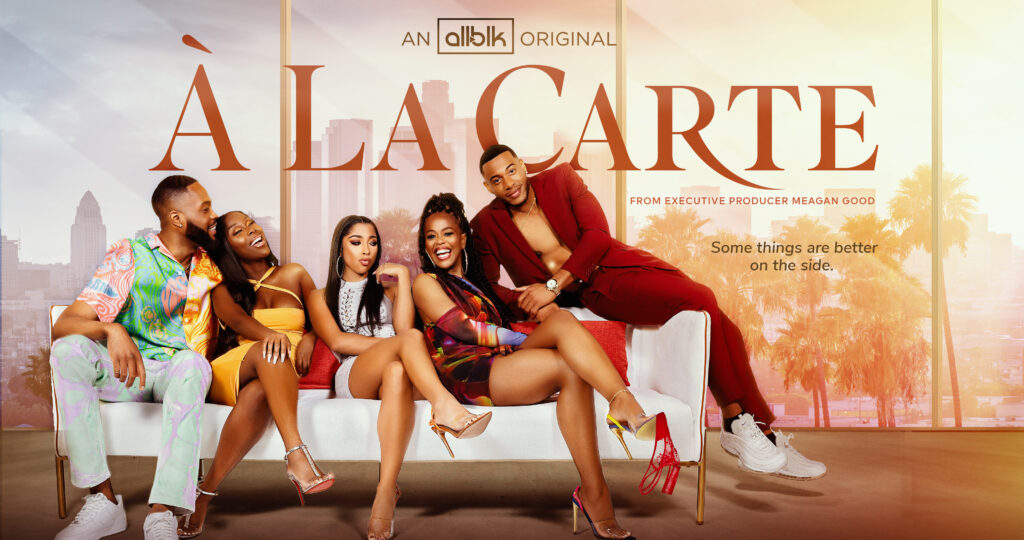 New York, NY – April 19, 2022 – Today, ALLBLK, the popular streaming service for Black TV and film from AMC Networks, released the trailer for the new millennial dating dramedy, À La Carte. The 6-episode scripted series premiering Thursday, May 12, 2022 from Breanna Hogan and executive producers, Meagan Good (Harlem) and Dijon Talton (Glee), centers on the Black millennial dating experience and one girl’s journey to the place she never thought she’d end up – on the side.

À La Carte follows Mahogany Rose (Pauline Dyer, A Stone Cold Christmas), a gorgeous, young go-getter and overachiever who has had high moral standards her entire life. Mahogany has always had somewhat of a whimsical idea of how her love life would turn out. But when she meets Kaleb Myles (Courtney Burrell, Tyler Perry’s Too Close to Home), a charming and charismatic man who checks off nearly all her boxes, she’s forced to reconsider her typical standards as she discovers that he falls short of a critical characteristic on her list – being single. With the help of her friends, Misha Taylor (Jessie Woo, Wild ‘N Out), a teacher who works hard and plays even harder; Reign Moore (Kendall Kyndall, Social Society, Games People Play), a recently cut off trust-funder forced to find alternative revenue to pay the bills and Shyra Clemons (Jenna Nolen), a grad student who believes she has found the perfect man; Mahogany must decide if she will stick to her preference of being the one and only – or step out of her comfort zone and learn to play number two.

ALLBLK is an invitation to a world of streaming entertainment that is inclusively, but unapologetically – Black. Featuring a diverse lineup of content that spans across genres and generations, the ALLBLK library includes exclusive original series such as A House Divided and Double Cross; must-see independent films, nostalgic Black cinema, popular WE tv originals, lively stage plays, and so much more. ALLBLK is available everywhere streaming services are found – iOS, Android, Amazon Prime Video Channels, Apple TV and Apple TV Channels, Roku and Roku Channels, Amazon Fire TV, YouTube TV, Cox, DISH, Sling TV, Charter and more. At www.ALLBLK.tv, ALLBLK offers a free 7-day trial and thereafter is just $5.99/month or $59.99/year. Keep up with ALLBLK on Facebook at Facebook.com/WatchALLBLK and Twitter/Instagram @WatchALLBLK.

About The Talton Company

“The Talton Company” is a Multi-Media Studio/Production Company based in Los Angeles, CA. Focused on amplifying the voices of marginalized communities. Determined to give a nuanced/non-judgmental voice to the often unseen and underserved.  Founder, Director/Actor Dijon Talton was inspired to launch “The Talton Company” after seeing endless stories filled with only stereotypes about Black and Brown communities.  “The Talton Company” wishes to usher in a new conversation and dialogue about what it means to live outside what society deems “normal” through both art and activism.