Interim Chief Executive Officer Matt Blank said: “AMC Networks delivered a solid second quarter, benefiting from strong subscriber growth for our differentiated streaming services as we execute on our strategy to super-serve passionate audiences with a curated, targeted content experience. We added nearly 1.3 million new subscribers in aggregate across our streaming portfolio, ahead of our forecast, to end the quarter with 10.8 million total paying subscribers. As we leverage our strong linear business, we are seeing increasing demand for our digital and advanced advertising opportunities. And our content creation strengths were on full display in the quarter, with viewership records, widespread critical acclaim for new and returning series including for Better Call Saul and Dark Winds, and Emmy Award nominations across major categories. We are building our business in a steady, disciplined and sustainable fashion, positioning ourselves for future growth and delivering shareholder value.” 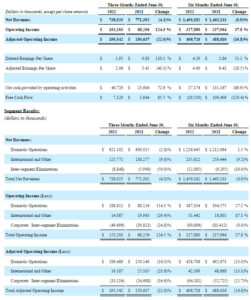 Please see the Company’s Form 10-Q for the period ended June 30, 2022, which will be filed later today, for further details regarding the above matters.

The Company defines Adjusted Operating Income (Loss), which is a non-GAAP financial measure, as operating income (loss) before share-based compensation expense or benefit, depreciation and amortization, impairment and other charges (including gains or losses on sales or dispositions of businesses), restructuring and other related charges, cloud computing amortization, and including the Company’s proportionate share of adjusted operating income (loss) from majority-owned equity method investees. From time to time, we may exclude the impact of certain events, gains, losses, or other charges (such as significant legal settlements) from AOI that affect our operating performance. Because it is based upon operating income (loss), Adjusted Operating Income (Loss) also excludes interest expense (including cash interest expense) and other non-operating income and expense items. The Company believes that the exclusion of share-based compensation expense or benefit allows investors to better track the performance of the various operating units of the business without regard to the effect of the settlement of an obligation that is not expected to be made in cash.

This earnings release may contain statements that constitute forward-looking statements within the meaning of the Private Securities Litigation Reform Act of 1995. These statements are based on management’s current expectations and are subject to uncertainty and changes in circumstances. Investors are cautioned that any such forward-looking statements are not guarantees of future performance or results and involve risks and uncertainties and that actual results or developments may differ materially from those in the forward-looking statements as a result of various factors, including financial community and rating agency perceptions of the Company and its business, operations, financial condition and the industries in which it operates and the factors described in the Company’s filings with the Securities and Exchange Commission, including the sections entitled “Risk Factors” and “Management’s Discussion and Analysis of Financial Condition and Results of Operations” contained therein. The Company disclaims any obligation to update any forward-looking statements contained herein.

AMC Networks will host a conference call today at 8:30 a.m. ET to discuss its second quarter 2022 results. To listen to the call, please visit investors.amcnetworks.com.

AMC Networks (Nasdaq: AMCX) is a global entertainment company known for its popular and critically-acclaimed content. Its brands include targeted streaming services AMC+, Acorn TV, Shudder, Sundance Now, ALLBLK, and the newest addition to its targeted streaming portfolio, the anime-focused HIDIVE streaming service, in addition to AMC, BBC AMERICA (operated through a joint venture with BBC Studios), IFC, SundanceTV, WE tv and IFC Films. AMC Studios, the Company’s in-house studio, production and distribution operation, is behind some of the biggest titles and brands known to a global audience, including The Walking Dead, the Anne Rice catalog and the Agatha Christie library. The Company also operates AMC Networks International, its international programming business, and 25/7 Media, its production services business. 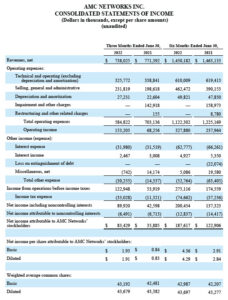 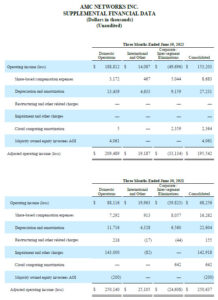 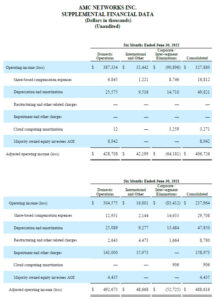 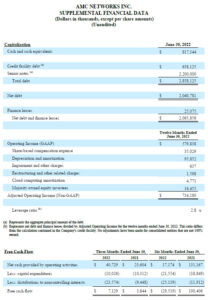 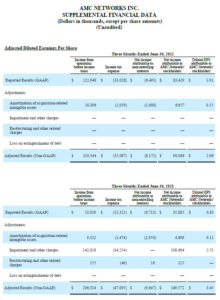 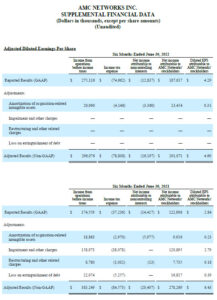