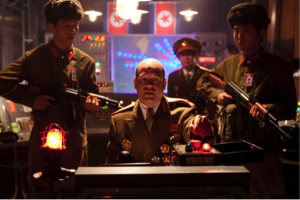 NEW YORK, NY, October 7, 2014 – David Cross is bringing his scripted comedy The Increasingly Poor Decisions of Todd Margaret back to IFC for a third season. Based in London, the series is created, written by and stars Cross (Arrested Development) as Todd Margaret, an American lacking any sense of good judgment. After a three-year hiatus, the show will return to IFC in 2015 with six all-new, half-hour episodes picking up where the second season left off when Todd detonates a battery of nuclear bombs that incinerate the planet. Writing on the third season has begun and production will start next year.

“As thrilled as I am to not have to answer the question, ‘Hey man, will there be a third series of Todd Margaret or what?’ anymore, the true thrill comes in figuring out how to extend a serialized episodic in which the world blows up at the end of series two. How do you do that for six episodes?! Well Shaun, Mark, and I are up to the challenge,” said Cross. “I sincerely couldn’t ask for a better group of folks to be doing it for than the lovely ladies (and one dude now) at IFC. It is such a pleasure to work for them. They are a rarity in this business.”

“Perhaps it was a poor decision for Todd to end the world, but working with David to bring this series back is a great decision for the fans,” said Jennifer Caserta, IFC’s president.  “We look forward to welcoming Todd Margaret and whoever else survived the apocalyptic blast back to IFC in 2015.”

Throughout the first two seasons, Todd Margaret bluffs his way into a senior sales position heading up the London office for the new energy drink Thunder Muscle, instigates a biohazard emergency at a major grocery store, gets swindled out of his Thunder Muscle stock by Turkish terrorists, disgraces a national tribute to fallen soldiers, gets arrested for breaking into Parliament, and at the conclusion of season two, inadvertently blows up the world. Alongside Cross, the series first two seasons feature Will Arnett (Arrested Development), Sharon Horgan (Pulling), and Blake Harrison (The Inbetweeners), along with guest stars Janeane Garofalo (Reality Bites), Jon Hamm (Mad Men), Spike Jonze (Jackass Presents: Bad Grandpa), Amber Tamblyn (Two and a Half Men) and Russ Tamblyn (West Side Story).

Season one delivered over one million total viewers to IFC while the second season jumped +50% to nearly 1.6 million viewers, based on Live+7 data.  The first two seasons continue to be available on Netflix and DVD.

Joining IFC’s 2015 originals roster, The Increasingly Poor Decisions of Todd Margaret will air alongside new seasons of Portlandia, Maron and Comedy Bang! Bang!, the next installment of The Spoils of Babylon franchise, The Spoils Before Dying, the new series American Documentary (working title) from Fred Armisen, Bill Hader and Seth Meyers, and the first ever CollegeHumor Comedy Music Awards.

The Increasingly Poor Decisions of Todd Margaret is produced for IFC by Merman Films in the UK. The series is written by Cross, Shaun Pye (Extras) and Mark Chappell (A Young Doctor’s Notebook). The producer for Merman Films is Clelia Mountford and David Cross is an executive producer.

The Increasingly Poor Decisions of Todd Margaret is based on an original series by RDF Television, part of the Zodiak Media Group.

IFC is the home of offbeat, unexpected comedies.  Series like Portlandia, Maron and Comedy Bang! Bang! air alongside fan-favorite movies and comedic cult TV shows.  Owned and operated by AMC Networks Inc., along with sister channels AMC, SundanceTV and WE tv, IFC is in 73 million U.S. homes across all platforms.  IFC:  Always On Slightly Off