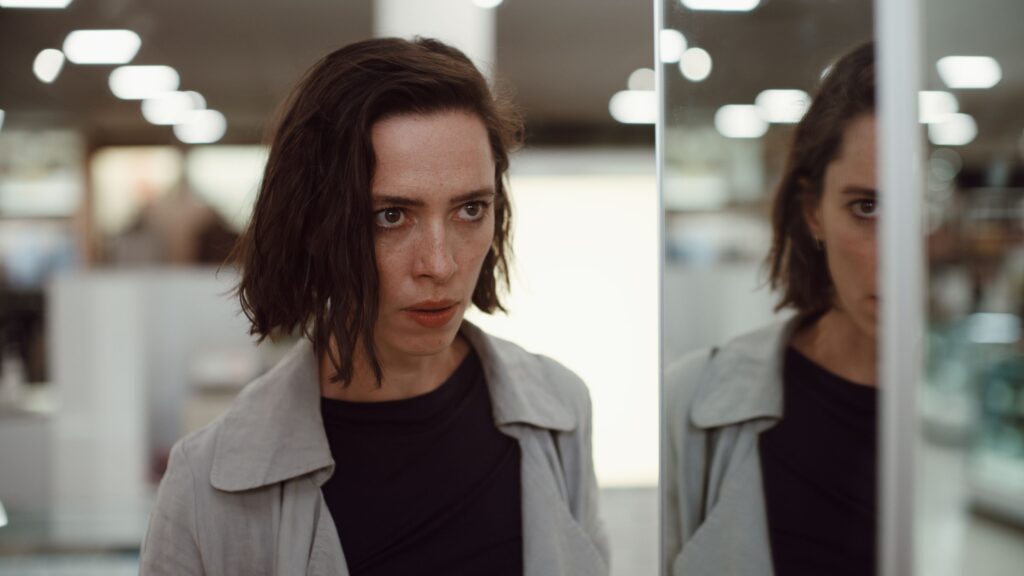 NEW YORK, NY (January 28, 2022) – IFC Films and Shudder announced today that they are acquiring North American rights to psychological thriller RESURRECTION written and directed by Andrew Semans (Nancy, Please), starring Rebecca Hall, Tim Roth, Grace Kaufman and Michael Esper. The film premiered this week at the 2022 Sundance Film Festival to widespread critical acclaim, rapidly becoming one of the most talked about films at the festival. IFC Films will release the film in theaters and on VOD with Shudder taking the first streaming window.

RESURRECTION’s Margaret (Rebecca Hall) leads a successful and orderly life, perfectly balancing the demands of her busy career and single parenthood to her fiercely independent daughter Abbie. Everything is under control. But that careful balance is upended when an unwelcome shadow from her past, David (Tim Roth) returns, carrying with him the horrors of Margaret’s past. Battling her rising fear, Margaret must confront the monster she’s evaded for two decades who has come to conclude their unfinished business. Writer-director Andrew Semans delivers pure havoc one moment and feelings of deep familiarity the next, creating a film that promises a gripping emotional journey fused with a grand guignol style living nightmare.

Arianna Bocco, President of IFC Films said, “Rebecca Hall and Tim Roth give career-defining performances in Andrew Semans’ revelatory and diabolically entertaining RESURRECTION. We are so thrilled to partner with Andrew and the amazing producing team to bring a film to audiences that will completely defy expectation.”

Director Andrew Semans added, “IFC Films has released some of the greatest films of the past two decades. It’s a great honor to be working with their remarkable team and a great pleasure to know that RESURRECTION will be in such good hands.”

“Rebecca Hall gives a performance for the ages and Tim Roth is absolutely chilling in this masterful film by Andrew Semans.  People will be talking about this film for years to come, and we’re thrilled to be able to bring it to Shudder members,” said Craig Engler, GM for Shudder.

Rebecca Hall has received rave reviews for one of the most talked about performances at this year’s festival, with Esther Zuckerman at Thrillist stating the film “features a performance from Hall that is absolutely mesmerizing, proving her yet again to be one of the best actors of her generation. RESURRECTION is absolutely WILD.” David Ehrlich at Indiewire further describes the chemistry of the characters as, “a tug-of-war that allows RESURRECTION to be a heady psychodrama one minute and a shout-at-the-screen romp the next on its way to an ending that hits both notes at the same time”.

The deal for the film was negotiated by IFC Films’ Head of Acquisitions and Production Scott Shooman with WME Independent and 2AM on behalf of the filmmakers.

IFC Films is home to the most nuanced director-driven cinema of the last 20 years, and more specifically some of the most exciting new voices in genre film of the last decade, including Natalie Erika James’ RELIC, Dave Franco’s THE RENTAL, Jennifer Kent’s THE BABADOOK, Carlo Mirabella Davis’ SWALLOW, and the latest film from Peter Strickland premiering at the upcoming Berlinale, FLUX GOURMET. IFC Films is also releasing two more buzzy titles from the 2022 Sundance Film Festival, the critically acclaimed Finnish Midnight film HATCHING, directed by first-timer Hanna Bergholm, and the prestigious Venice Golden Lion winner, Audrey Diwan’s HAPPENING – both films are currently 100% on Rotten Tomatoes.