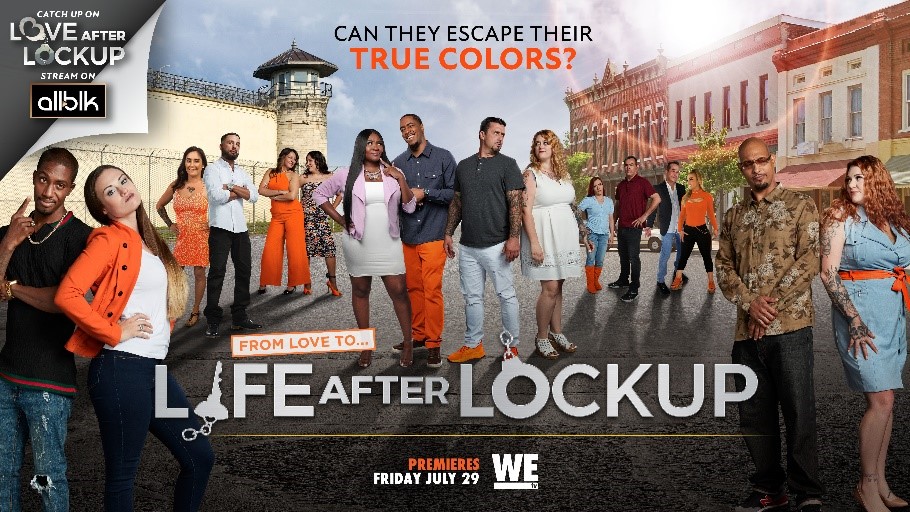 New York, NY — June 27, 2022 – A brand new season of WE tv’s smash hit spinoff series “Life After Lockup” is back with twelve ninety-minute all-new episodes premiering on Friday, July 29 at 9pm ET / 8pm CT. Will these ex-cons feel imprisoned in their own relationships, or are these couples ready for a life sentence together?

Life After Lockup follows nine former inmates and their significant others from the hit series Love After Lockup through their weird and wild journey to survive the real world. This season’s new couples face travel limitations and restrictions on consorting with old connections, temptations of alcohol and drugs. Returning couples deal with the growing pains of adjusting to love, family and marriage while juggling the emotional challenges of life on the outside. Will they stay together and stay out of prison?

NEW TO “LIFE AFTER LOCKUP”

Tayler must reveal her engagement to twin sister and roommate Bobbie, who cannot stand Chance. While Chance finally builds Bobbie a garage bedroom and promptly moves her in, Bobbie feels it is all a ploy to get rid of her. Chance has been in and out of prison his entire adult life but can the future he is planning with Tayler and the girls keep him out of prison for good?

These newlyweds face their first challenge immediately– distance. Branwin’s parole restrictions require her to stay in Portland, and Chazz has a job he takes very seriously back in La Grange, KY. Once they’re able to be together, Chazz’s sister struggles to accept their relationship, and Branwin’s daughter and friends think Chazz and the move are a bad idea. Meanwhile, Branwin’s bad-boy ex Aaron might also have something to say about this new marriage.

RETURNING TO “LIFE AFTER LOCKUP”

With Sara 5 months pregnant, the couple race to plan the wedding of their dreams. However, fresh out of prison, Destinie is looking to catch up with Shawn, and she has come prepared with a list– plus an amount for the money she believes Shawn owes her. If Destinie makes it to Ohio, how will she react when she learns Shawn is married to another former felon…with a baby?

Puppy and fiancé Eric are back together after her jail stint and planning their wedding…but to everyone’s surprise, Eric is still legally married– and Puppy fears he’s still involved with his ex-wife. Amber catches baby fever after meeting a new man but is worried it may be too late for her.

Marriage could be on the horizon for the couple as Ray finally gets an engagement ring for Britney, but he must ask Britney’s parents for their blessing first. Unfortunately, Ray’s restitution looms large over their plans leaving Britany with questions and contemplating reaching out for a legal opinion. Will the couple make it down the aisle and ultimately start a family?

We found out Daonte and Lindsey were dating on the special, “Love After Lockup: How to Date an Inmate.” Lindsey is released from prison without warning due to a Covid outbreak at her facility and Daonte goes to Mississippi the next day to finally meet his dream girl in person– though Daonte’s mom is not a fan of this new relationship. When Daonte arrives in Mississippi, Lindsey is living with a former friend and drug dealer, Blaine. Lindsey brushes off Daonte’s jealousy but his visit sets off alarms.

“Sharp Entertainment, a part of Sony Pictures Television, is one of the biggest creative powerhouses in unscripted television production today.  Led by producer Matt Sharp since 2003, Sharp is one of the industry’s leading production enterprises worldwide delivering thousands of hours of programming and unparalleled ratings achievement across multiple networks.  Sharp’s mega-hit franchise, TLC’s “90 Day Fiancé,” is a top-performer on all of cable along with spinoffs including “90 Day Fiancé: Happily Ever After,” “90 Day Fiancé: Before the 90 Days,” and “90 Day Fiancé: The Other Way.” Sharp is also behind WE TV’s buzzy docu-series “Love After Lockup,” as well as top-rated “Man v. Food” for the Cooking Channel. Other notable Sharp series include “Extreme Couponing” for TLC, “Doomsday Preppers” for National Geographic, and the long-running hit “The Fabulous Life” for VH1, among many others.”

With compelling, can’t miss unscripted shows, WE tv’s programming is fueled by personalities and relationships filled with purpose and passion. WE tv welcomes everyone and creates an inclusive experience across all platforms: on TV, online, on demand, and social media, embracing how today’s digitally savvy, socially engaged audiences connect through content, using it as a catalyst to drive conversation and build community. Further building on this mission, current WE tv originals are now available to stream on WE tv’s sister platform, ALLBLK. WE tv is owned and operated by AMC Networks Inc., and its sister networks include AMC, BBC America, IFC, SundanceTV and streamers Acorn TV, ALLBLK, AMC+, Shudder and Sundance Now.