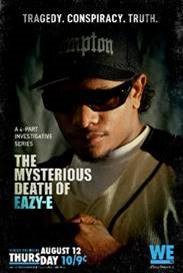 New York, July 15, 2021 – WE tv debuts groundbreaking original investigative docuseries, “The Mysterious Death of Eazy-E” on Thursday, August 12th at 10pm.  Featuring never-before-seen footage and interviews, the four hour-long installments explore the extraordinary impact Eric Wright, aka “Eazy-E,” had on the music industry and his daughters quest for answers to the perplexing circumstances surrounding the 1995 death of the gangsta rap icon.

Did Eazy-E truly die from AIDS? If so, how did he contract it? Are there people who wanted this pioneer and father dead? The investigative series uncovers these questions and more. “The Mysterious Death of Eazy-E” follows rap legend Eazy-E’s daughter, Ebie, on a personal journey to examine the unexplained circumstances surrounding her father’s death 26 years ago. Ebie teams up with her mother, Eazy’s ex, Tracy, as well as hip-hop journalist, Jasmine Simpkins, to seek the truth. Unravelling this intricate story through tracking down eyewitnesses to Eazy-E’s last days, revealing unseen footage and testing long-held theories around his untimely death. The investigation attempts to give the family, and his fans, clarity and the closure that they all crave…what really happened to Eazy-E?

Born Eric Lynn Wright in Compton California and known as the Godfather of Gangsta Rap, Eazy-E is responsible for igniting a revolution in the world of popular music. His company, Ruthless Records, and his iconic group NWA, gave the world a whole new kind of hip hop and paved the way for much of what the genre is today.  From the beginning, Eazy-E and his “gang” from the “CPT” invited controversy and reveled at pushing every boundary. From explicit, often violent, lyrics that denied them radio play to songs like “Straight Outta Compton” and “Fuck the Police” which drew the ire of the FBI and filled their live shows with a palpable tension. NWA was dubbed “The World’s Most Dangerous Group” for a reason.

Eazy-E built the most successful independent music startup of its time. But as the owner and most visible figure on the label, many became jealous of his success and he quickly attracted high profile enemies in the industry. Through the years, Eazy’s list of enemies grew to include The FBI, white supremacists, right wing terror groups and even rival distributers plotting secret takeovers have been alleged. And Eazy himself continued to invite controversy and criticism. He even took heat from his own community when he stood up for one of the police officers charged in the Rodney King beating.  His controversial life have much to do with the questions surrounding his death. There were many with something to gain. If foul play was at all a factor, Eazy-E would make a logical candidate.