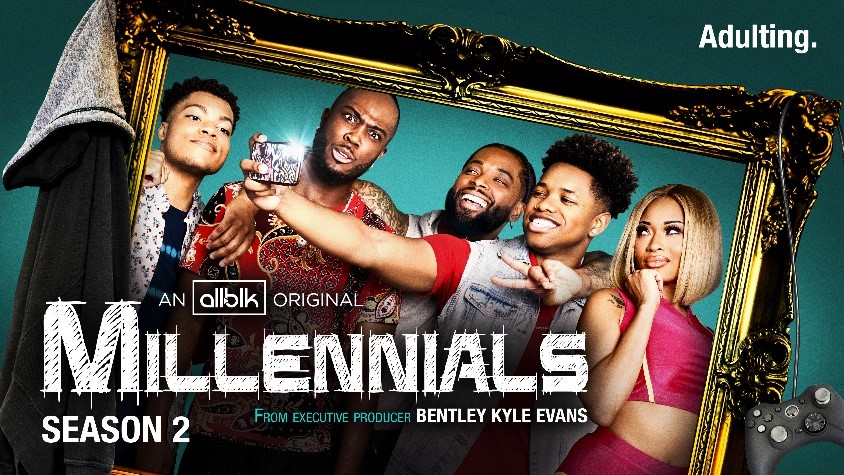 New York, NY – March 3, 2022 – “Millennials,” the hilarious comedy centered around the lives of four 20-something roommates and their neighbor across the hall as they navigate the chaos of being young, finding success, and finding themselves in the city of angels, returns for Season 2, Thursday, March 17 on AMC Networks’ streamer, ALLBLK. In the new season, the crew is back with a new roommate, new love connections, and a fresh set of challenges as they strive to go from no money to ‘mo money.

Travis (Philip Bolden, Are We There Yet?), Jaheem (Keraun “King Keraun” Harris, Hiking With Rappers) and Todd (Aaron Grady, Everybody Hates Chris) find themselves hustling to make rent while Omar is on a business assignment overseas. They now must coexist with their new roommate, Derrick “Fitz” Fitzgerald (Nathan Davis Jr., Snowfall, Detroit), a renaissance man who makes his living as an art dealer. Meanwhile, the unlikely romance between Jaheem and Mercedes (Teresa “Topnotch” Celeste, Tales, Wild N’ Out) is moving fast and furious however he quickly learns the do’s and don’ts of having a girlfriend in the new age social media era.

CeCe (Katherine Florence, social media influencer @katieflorence) and Mercedes start a podcast to voice their opinions while Cousin Adrian (comedian Juhahn Jones) returns and lends his expertise on dating women of color. Todd ventures into a new lucrative career in professional video gaming but faces an uphill battle as his gaming career is challenged by the top gamers in the nation. Upon Travis’ return to the apartment, he stumbles upon an invention that blows up on the internet, but his success is short lived, when he falls victim to cancel culture. Rounding out the cast are, Tanjareen Thomas, Buddy Lewis, Howard M. Lockie, Bobby Slaski, and DeShaude Barner in recurring roles.