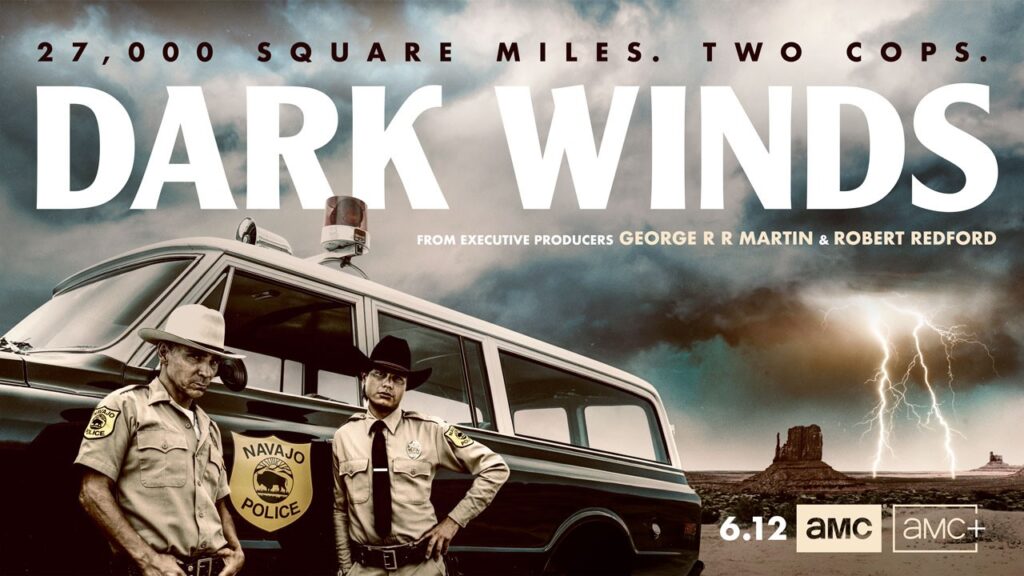 New York, NY – April 18, 2022 – AMC and AMC+ today released the trailer and key art of its upcoming original series, Dark Winds. The noir thriller, based on the iconic Leaphorn & Chee book series by Tony Hillerman, premieres Sunday, June 12 on AMC and AMC+ with two episodes. One new episode will debut every Sunday on AMC, and AMC+ subscribers will have advance access to an additional episode each week, beginning June 19.

Set in 1971 on a remote outpost of the Navajo Nation near Monument Valley, Dark Winds follows Lieutenant Joe Leaphorn (Zahn McClarnon, The Son, Westworld, Fargo) of the Tribal Police as he is besieged by a series of seemingly unrelated crimes. The closer he digs to the truth, the more he exposes the wounds of his past. He is joined on this journey by his new deputy, Jim Chee (Kiowa Gordon, The Red Road, Roswell, New Mexico). Chee, too, has old scores to settle from his youth on the reservation. Together, the two men battle the forces of evil, each other and their own personal demons on the path to salvation.

AMC is home to some of the most popular and acclaimed programs on television. AMC was the first basic cable network to ever win the Emmy® Award for Outstanding Drama Series with Mad Men in 2008, which then went on to win the coveted award four years in a row, before Breaking Bad won it in 2013 and 2014. The network’s series The Walking Dead is the highest-rated series in cable history. AMC’s current original drama series are Better Call Saul, Fear the Walking Dead, Kevin Can F*** Himself, The Walking Dead, The Walking Dead: World Beyond and the forthcoming series 61st Street, Anne Rice’s Interview with the Vampire, Anne Rice’s Mayfair Witches, Dark Winds, Moonhaven, Pantheon, Ragdoll and Tales of the Walking Dead, among others. AMC also explores authentic worlds and discussion with original shows like Talking Dead, AMC Visionaries and Ride with Norman Reedus. AMC is owned and operated by AMC Networks Inc. and its sister networks include IFC, SundanceTV, BBC America and WE tv. AMC is available across all platforms, including on-air, online, on demand and mobile.

AMC+ is the company’s new premium streaming bundle featuring an extensive lineup of popular and critically acclaimed original programming from AMC, BBC America, IFC, and SundanceTV and full access to targeted streaming services Shudder, Sundance Now and IFC Films Unlimited, which feature content such as A Discovery of Witches, Creepshow, and Boyhood. The service features a continually refreshed library of commercial-free content, including fan favorites Mad Men, Halt & Catch Fire, Turn: Washington’s Spies, Hell on Wheels, NOS4A2, Orphan Black, Rectify, Portlandia, and series from The Walking Dead Universe, among many others. The service also offers a growing slate of original and exclusive series including Gangs of London, Kin, The North Water, Ragdoll, The Beast Must Die, Too Close, The Salisbury Poisonings, Cold Courage, Spy City, Ultra City Smiths, Anna, Anne Boleyn, Firebite, La Fortuna, That Dirty Black Bag and upcoming The Ipcress File. AMC+ recently launched in Canada, Australia, and India and is available in the U.S. through AMCPlus.com, the AMC+ app, and a number of digital and cable partners.