President and Chief Executive Officer Josh Sapan said: “AMC Networks had a strong second quarter with impressive financial results domestically as well as internationally, driven by robust growth in revenues for our targeted streaming services, particularly strong advertising growth, and high demand for our world-class content. We continue to advance our position as the worldwide leader in targeted streaming, with high subscriber satisfaction and strong consumption for our services. AMC+, our premium bundled offering, has quickly become our fastest-growing service, driven by expanding distribution and the strong, character-driven dramas that power it. Our streaming momentum and our expanding advertising efforts are enabling us to continue to meaningfully reconstitute the revenue mix of our company and to deliver continued growth and shareholder value.” 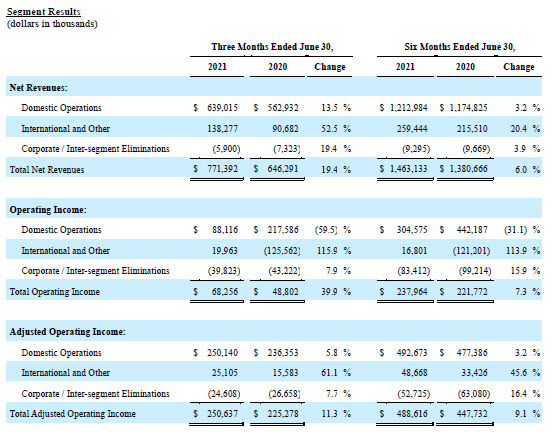 On July 16, 2021, the Company entered into a settlement agreement (the “Settlement Agreement”) with Frank Darabont, Ferenc, Inc., Darkwoods Productions, Inc., and Creative Artists Agency, LLC (together, the “Plaintiffs”) in actions brought in connection with Frank Darabont’s rendering services as a writer, director and producer of the television series entitled The Walking Dead. The consolidated cases were initially brought in 2013 and 2018 and the trial of the consolidated cases was scheduled to commence on April 4, 2022. The Settlement Agreement provides for a cash payment of $200 million (the “Settlement Payment”) to the Plaintiffs and future revenue sharing related to certain future streaming exhibition of The Walking Dead and Fear The Walking Dead. With regard to the Settlement Payment, the Company recorded a charge of $143.0 million, included in Impairment and Other Charges in consideration for the extinguishment of Plaintiffs’ rights to any compensation in connection with The Walking Dead and any related programs and the dismissal of the actions with prejudice, which amount is net of $57.0 million of ordinary course accrued participations.

As previously disclosed, the Company’s Board of Directors has authorized a program to repurchase up to $1.5 billion of the Company’s outstanding shares of common stock. The Stock Repurchase Program has no pre-established closing date and may

Please see the Company’s Form 10-Q for the period ended June 30, 2021 for further details regarding the above matters.

The Company defines Adjusted Operating Income (Loss), which is a non-GAAP financial measure, as operating income (loss) before depreciation and amortization, cloud computing amortization, share-based compensation expense or benefit, impairment and other charges (including gains or losses on sales or dispositions of businesses), restructuring and other related charges, and including the Company’s proportionate share of adjusted operating income (loss) from majority owned equity method investees. From time to time, we may exclude the impact of certain events, gains, losses or other charges (such as significant legal settlements) from AOI that affect our operating performance. Because it is based upon operating income (loss), Adjusted Operating Income (Loss) also excludes interest expense (including cash interest expense) and other non-operating income and expense items. The Company believes that the exclusion of share-based compensation expense or benefit allows investors to better track the performance of the various operating units of the business without regard to the effect of the settlement of an obligation that is not expected to be made in cash.

AMC Networks is a global entertainment company known for its popular and critically-acclaimed content. Its portfolio of brands includes AMC, BBC AMERICA (operated through a joint venture with BBC Studios), IFC, SundanceTV, WE tv, IFC Films, and a number of fast-growing streaming services, including the AMC+ premium streaming bundle, Acorn TV, Shudder, Sundance Now and ALLBLK. AMC Studios, the Company’s in-house studio, production and distribution operation, is behind award-winning owned series and franchises, including The Walking Dead, the highest-rated series in cable history. The Company also operates AMC Networks International, its international programming business, and 25/7 Media, its production services business. 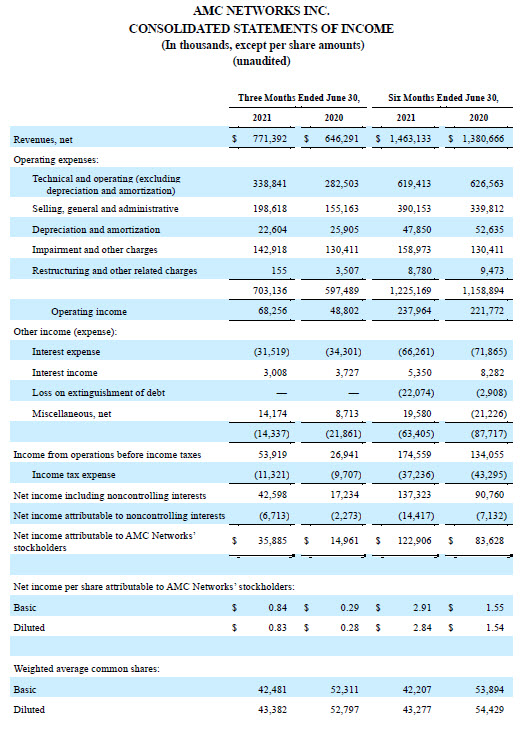 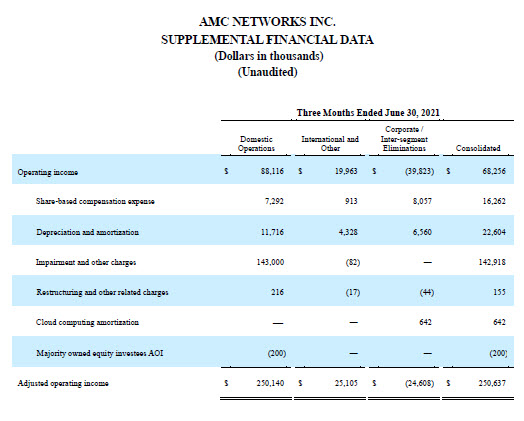 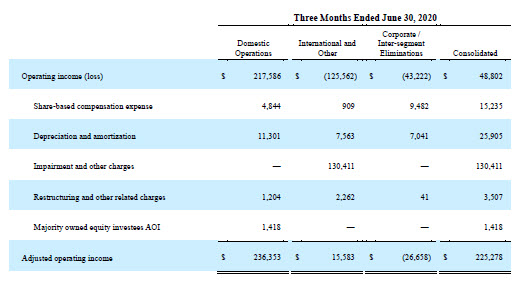 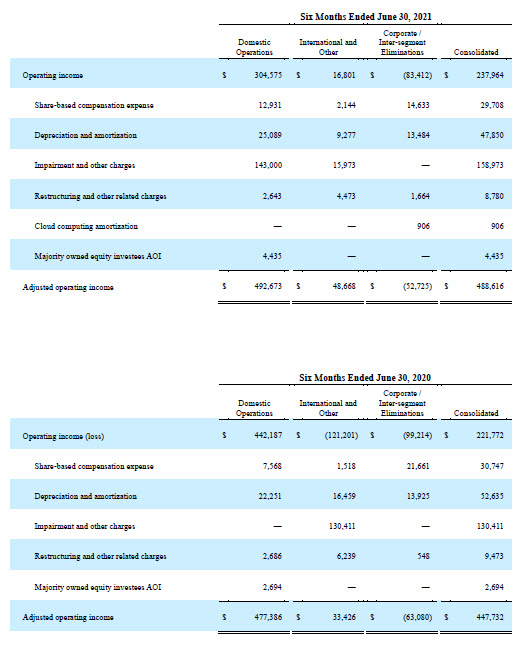 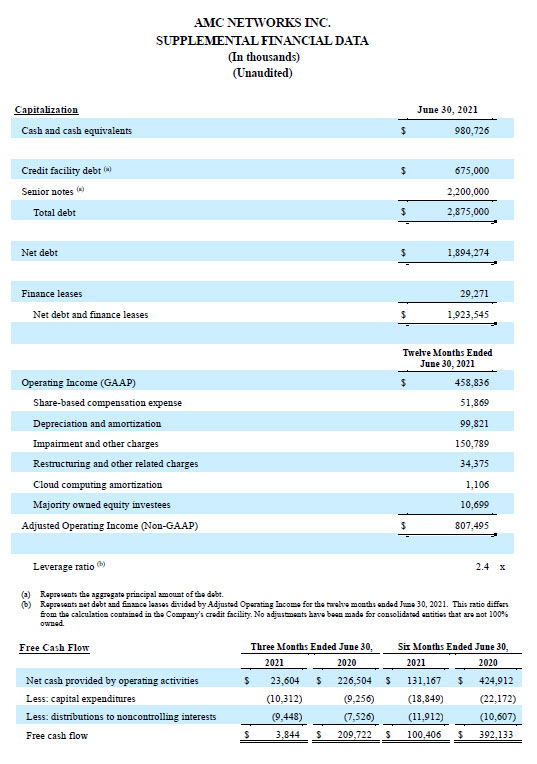 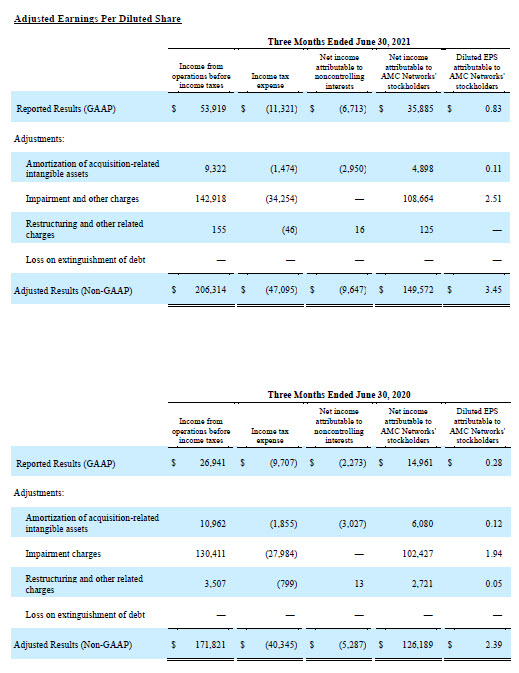 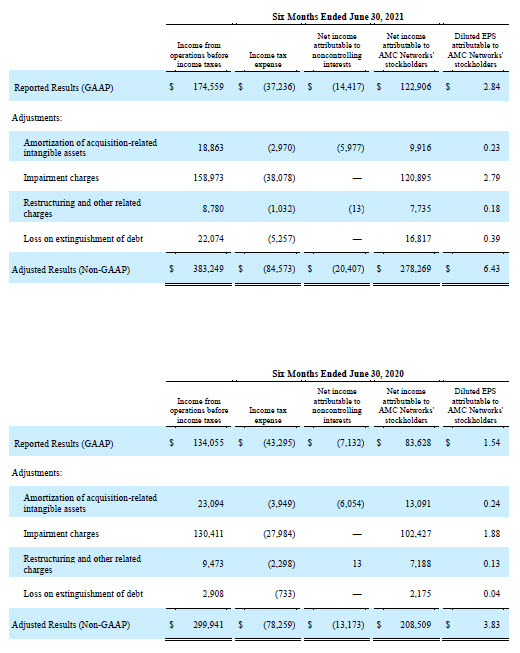