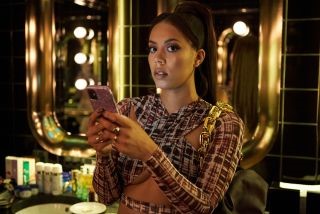 New York, NY – February 10, 2022 – AMC Networks’ BBC America will co-produce Mood, the highly anticipated first drama series from actor, writer, and singer-songwriter Nicôle Lecky. Based on her critically acclaimed Royal Court play (Superhoe) and produced by Bonafide Films for BBC Three, Mood follows Sasha Clayton (Lecky), a 25-year-old wannabe singer. The ground-breaking six-part series is told in part through the songs that Sasha creates and features an innovative original soundtrack performed by Lecky. The new drama series will premiere on BBC America in the United States and on premium streaming bundle AMC+ in the United States, Canada, and Australia in Fall 2022.

When she is kicked out of her family home, Sasha is forced to fend for herself, sofa-surfing with local dealer Saleem (Mohammad Dalmar), until she moves in with party girl Carly (Lara Peake, Brave New World), who introduces her to the exciting world of social media influencing. But as the gap between her online presence and her dream of being a singer continues to grow, Sasha finds herself struggling to escape a world that is more complex and darker than she could have imagined.

Nicôle Lecky said, “Mood started as a one woman play and I had such a joy creating the world and performing these characters. Working with Bonafide and teams at the BBC and BBC America to bring them to life on screen has been a dream. I cannot wait for everyone to see our super talented cast and live every moment with Sasha and them.”

Blake Callaway, General Manager of BBC America noted, “We are excited to break new ground again. Mood is a bold story featuring ambition, attitude, dark humor and a killer soundtrack. Nicôle Lecky is a singular talent that will sit alongside the other breakout women led shows that have defined success on BBC America. Sasha is the ideal addition to a slate that has included the first female Doctor Who, Villanelle, Eve and the clones of Orphan Black.”

Margery Bone, Executive Producer for Bonafide Films said, “We are delighted to be working with BBC America on Mood, their passion and commitment shows they are the perfect home to bring Mood to US audiences.”

“We are thrilled that BBC America will be the home for Nicôle Lecky’s Mood and we can’t wait to see her incredible talent on screen in the U.S.,” said Kelly Miller, SVP, Scripted Strategy, BBC Studios.

Directed by Dawn Shadforth and Stroma Cairns and produced by Lisa Walters, Mood is written by and stars Nicôle Lecky. The series is executive produced by Nicôle Lecky, Margery Bone for Bonafide Films and Lucy Richer and Ayela Butt for the BBC. BBC Studios is distributing the series internationally. The deal was brokered by Kristin Jones, EVP of international programming, AMC Networks, and Jenny Zamora, Director, Content Sales & Distribution, BBC Studios.

BBC Studios, a global content company with bold British creativity at its heart, is a commercial subsidiary of the BBC. Able to take an idea seamlessly from thought to screen and beyond, its activities span content financing, development, production, sales, branded services, and ancillaries across both its own productions and programs and formats made by high-quality UK independents. Award-winning British programs made by the business are internationally recognized across a broad range of genres and specializations, with brands like Dancing with the Stars/Strictly Come Dancing, Top Gear, and Doctor Who. BBC.com, BBC Studios’ global digital news platform, provides up-to-the-minute international news, in-depth analysis and features to more than 139 million unique browsers each month. BBC Studios has offices in 20 markets globally, including ten production bases in the UK and production bases or partnerships in a further nine countries around the world. The company, which ordinarily makes around 2,000 hours of content a year for both the BBC and third parties including Apple, Netflix, and Migu, is a champion for British creativity around the world. It is also a committed partner for the UK’s independent sector through a mix of equity partnerships, content investment, and international distribution for program titles.

In the Americas, BBC Studios operates a diverse portfolio of businesses focused on bringing the best of British content to fans across the region. This includes joint ventures with AMC Networks for flagship channel BBC AMERICA (U.S.) and with ITV for SVoD service BritBox (U.S./Canada), as well as a strategic partnership in Canada with Blue Ant Media for channels BBC Earth and BBC First. In February 2021, BBC SELECT, an ad-free, digital streaming channel offering all-new documentaries across culture, politics, and ideas, launched in the U.S. and Canada on Amazon Prime Video Channels and the Apple TV app. BBC Studios also runs a robust linear and digital content sales and co-productions operation, as well as a franchise management business. In addition, BBC Studios operates one of its major scripted and unscripted production unit in Los Angeles, responsible the Emmy®-winning Dancing with the Stars, the multi-award-winning Life Below Zero, and the popular reboot of the classic quiz show Weakest Link, among others.