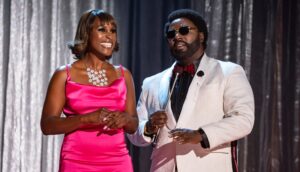 New York, NY – August 10, 2022 – IFC today announced the exciting and star-studded lineup of guest stars set to appear in the upcoming season of the Emmy®-winning variety series Sherman’s Showcase, returning to IFC and AMC+ on Wednesday, October 26 at 10:30pm ET. AMC+ will premiere the first two episodes on October 26, with additional episodes available to stream on the service one week early. The series is produced by RadicalMedia, producers of this year’s Academy Award®-winning Best Documentary Film.

Said Blake Callaway, General Manager of IFC, “Sherman’s Showcase has it all. Bashir and Diallo have delivered a jam-packed new season full of sketches, songs, fashion statements, movie parodies, outrageous antics, and even a trip to Lagos.  This block party of a sketch show is back and better than ever.”

“We worked so hard to make this season happen,” show creators Riddle and Salahuddin said in a statement. “We filmed during a Covid spike. Our writers’ room was in a parking lot. We were wearing masks in the recording booth. It was insane. Still, somehow, we think we’ve topped Season 1. As our director Matthew Piedmont has said, we tried to only elevate the Sherman’s Showcase experience this season. And despite the challenges, the cast, crew, and a ton of dancers and stars still found their way to the studio where we shoot this show. Risking their lives. And ours. It was worth it.”

IFC is the home of offbeat, unexpected comedies. Acclaimed series Documentary Now!, Brockmire, Sherman’s Showcase, Baroness von Sketch Show, and Year of the Rabbit air alongside fan-favorite movies and comedic cult TV shows. IFC is owned and operated by AMC Networks Inc., and available across multiple platforms. IFC is Always On, Slightly Off.

AMC+ is the company’s new premium streaming bundle featuring an extensive lineup of popular and critically acclaimed original programming from AMC, BBC America, IFC, and SundanceTV and full access to targeted streaming services Shudder, Sundance Now and IFC Films Unlimited, which feature content such as A Discovery of Witches, Creepshow, and Boyhood. The service features a continually refreshed library of commercial-free content, including iconic series from the AMC Networks portfolio including Mad Men, Halt & Catch Fire, Hell on Wheels, Turn: Washington’s Spies, Rectify, Portlandia, and series from The Walking Dead Universe, among many others. The service also offers a growing slate of original and exclusive series including Gangs of London, Kin, The North Water, That Dirty Black Bag, This is Going to Hurt, Moonhaven and the first two series in a new Anne Rice universe, Anne Rice’s Interview with the Vampire and Anne Rice’s Mayfair Witches. With new movies released every Friday, AMC+ is the newest destination for exclusive film premieres direct from theaters all year long. AMC+ recently launched in Canada, Australia, India, and Spain and is available in the U.S. through AMCPlus.com, the AMC+ app, and a number of digital and cable partners.