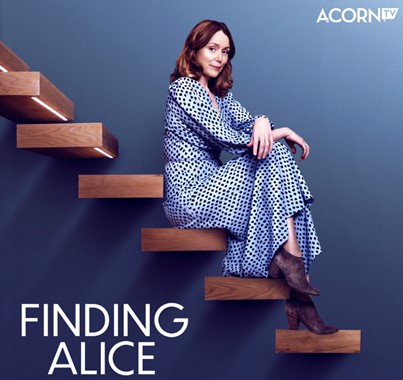 New York, NY – August 10, 2021 – Co-created by and starring BAFTA-nominated actress Keeley Hawes (Bodyguard, Line of Duty), Finding Alice will make its exclusive US and Canada debut with all six episodes on Monday, September 13 on Acorn TV, AMC Networks’ acclaimed streamer devoted to British and international television. The contemporary drama with comedic elements, created by Hawes, series director Roger Goldby (The Durrells) and Simon Nye (The Durrells), and written by Goldby and Nye, focuses on Alice’s honest, raw, darkly-comic journey of grief, love and life after the death of her partner Harry.

For Alice (Hawes), Harry (Jason Merrells, Agatha Raisin) and their daughter, Charlotte (Isabella Pappas, Paranoid), moving into their new home should have been a dream come true. But it quickly turns into a nightmare when Alice discovers Harry dead at the bottom of the stairs. Harry designed their new smart house, so it’s weird and wonderful, and one more disorientation for Alice on top of her sense of loss and abandonment.

Alice’s beloved partner is no more, and now she can’t find the fridge. Family should be a source of comfort, but Harry’s parents, Minnie (Gemma Jones, Bridget Jones’ Diary) and Gerry (Kenneth Cranham, The White Princess), keep popping round uninvited. While Alice’s own parents, Roger (Nigel Havers, Coronation Street) and Sarah (Joanna Lumley, Absolutely Fabulous), only seem to add to her list of problems. With Harry gone and Alice struggling to cope, Charlotte is forced to bottle up her grief and be the responsible one. Especially when the police turn up asking questions about the night that Harry died. To make matters worse, more unexpected visitors start knocking on Alice’s door, and she begins to realize that Harry’s business debt wasn’t the only secret he kept hidden from her.

The series is produced by RED Production Company (a STUDIOCANAL company) in association with Bright Pictures TV, Buddy Club Productions and Genial Productions.

For Alice, Harry and their daughter, Charlotte, moving into their dream home quickly becomes a nightmare when Harry is found dead at the bottom of the stairs.

Meeting George leaves Alice shaken while she arranges a funeral for the man she loved. Meanwhile the police continue to look for an unidentified witness captured on the CCTV.

Charlotte decides that she’s ready to return to school, but Alice feels lost without her and struggles to cope.

Alice grows desperately short of money and must stop her home from being sold from under her nose. Meanwhile, Alice uncovers a deed for land in Harry’s name.

Alice’s decision to try for a baby using the sperm Harry mysteriously stored before he died is met with doubts from Charlotte and Sarah.

With a newfound confidence Alice is determined to develop Harry’s land, but can she solve her growing list of problems before trying for Harry’s baby?