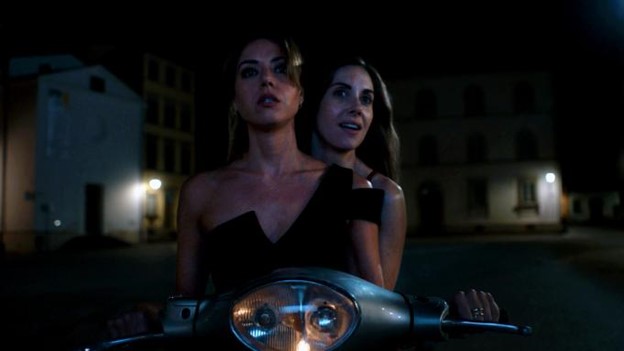 SPIN ME ROUND marks the third IFC Films feature with Brie, who most recently starred in The Rental, the Dave Franco-directed thriller that was a hit at drive-ins nationwide and on VOD during the summer of 2020.

Baena and Brie previously collaborated on Horse Girl together, which Brie starred in and co-wrote with Baena, who directed. Brie also appeared in Baena’s The Little Hours and Joshy.

In SPIN ME ROUND, Brie stars as the manager of an Italian restaurant chain who wins the opportunity to attend the franchise’s educational immersion program in Italy. What she thought would be a romantic getaway devolves into chaos and catastrophe.

Arianna Bocco, President of IFC Films, said, “We have long admired Jeff Baena’s films and are thrilled to have the opportunity to partner with him and his incredible filmmaking team on this fun and hilarious ride. Jeff, Alison and the Duplass Brothers are true creative geniuses and icons of independent cinema, and we can’t wait for audiences to experience this all-star cast over the summer.”

Director and co-writer, Jeff Baena added, “I was really impressed with Arianna and her team’s passion, thoughtfulness, and innovation coupled with their track record of ushering in so many incredible independent films. I’m so grateful to have an opportunity to finally partner with IFC Films and share SPIN ME ROUND with the world.”

Courtney Thomasma, General Manager of AMC+, said, “SPIN ME ROUND is the perfect summer fare for our subscribers, who continue to come to AMC+ as a premium destination for compelling new feature films with their favorite stars. We are huge fans of Alison Brie, who our audience knows well from the iconic Mad Men, and we’re excited to be working with her, Jeff Baena and the entire producing team on this delightful new movie.”

The deal for the film was negotiated by SVP of Acquisitions and Productions for IFC Films, Scott Shooman with ICM Partners and WME Independent on behalf of the filmmakers.

AMC+ is the company’s new premium streaming bundle featuring an extensive lineup of popular and critically acclaimed original programming from AMC, BBC America, IFC, and SundanceTV and full access to targeted streaming services Shudder, Sundance Now and IFC Films Unlimited, which feature content such as A Discovery of Witches, Creepshow, and Boyhood. The service features a continually refreshed library of commercial-free content, including fan favorites Mad Men, Halt & Catch Fire, Turn: Washington’s Spies, Hell on Wheels, NOS4A2, Orphan Black, Rectify, Portlandia, and series from The Walking Dead Universe, among many others. The service also offers a growing slate of original and exclusive series including Gangs of London, Kin, The North Water, Ragdoll, The Beast Must Die, Too Close, The Salisbury Poisonings, Cold Courage, Spy City, Ultra City Smiths, Anna, Anne Boleyn, Firebite, La Fortuna, That Dirty Black Bag, the upcoming The Ipcress File and the first two series in a new Anne Rice universe, Anne Rice’s Interview with the Vampire and Anne Rice’s Mayfair Witches. AMC+ recently launched in Canada, Australia, and India and is available in the U.S. through AMCPlus.com, the AMC+ app, and a number of digital and cable partners.

Under their banner Duplass Brothers Productions (DBP), award-winning filmmakers Mark Duplss, Jay Duplass and Mel Eslyn create original projects for film, television, and digital media.  In television, DBP is under a first-look deal with HBO which has yielded the hit series ROOM 104, TOGETHERNESS, and the HBO animated series ANIMALS, which sold after premiering at Sundance in 2015.

DBP is also active in the docuseries television space, best known for producing Netflix’s WILD WILD COUNTRY, winner of the Emmy Award for Outstanding Documentary or Nonfiction Series in 2018. Most recently, DBP produced the popular series THE LADY AND THE DALE on HBO, which followed Elizabeth Carmichael, a larger-than-life entrepreneur who rose to prominence in the 1970’s with her promotion of a fuel-efficient, three-wheeled car known as The Dale.  The team also produced Hulu’s SASQUATCH,  ON TOUR WITH ASPERGER’S ARE US for HBO, and EVIL GENIUS for Netflix.

In film, Mark and Jay first gained recognition in the early 2000’s for writing, directing and producing several acclaimed independent and studio films, including THE PUFFY CHAIR, BAGHEAD, CYRUS, and JEFF, WHO LIVES AT HOME. DBP’s numerous feature film credits in the decades following have included THE ONE I LOVE, TANGERINE, SAFETY NOT GUARANTEED, CREEP (1 & 2), THE OVERNIGHT, BLUE JAY, HORSE GIRL, PADDLETON, OUTSIDE IN, DUCK BUTTER, LANGUAGE LESSONS, THE SKELETON TWINS and the Ady Barkan documentary NOT GOING QUIETLY. DBP recently released Roshan Sethi’s debut 7 DAYS which took home a Film Independent Spirit Award for Best First Feature, as well as Sam Jones’ HBO documentary TONY HAWK:UNTIL THE WHEELS FALL OFF on HBO.  Upcoming features include Jeff Baena’s latest feature SPIN ME ROUND, Sarah Adina Smith’s THE DROP, Megan Griffith’s I’LL SHOW YOU MINE, Mel Eslyn’s feature debut BIOSPHERE, and Nnamdi Asomugha’s debut THE KNIFE.  They are currently in production on the second season of their latest hit HBO series SOMEBODY SOMEWHERE, starring Bridget Everett.