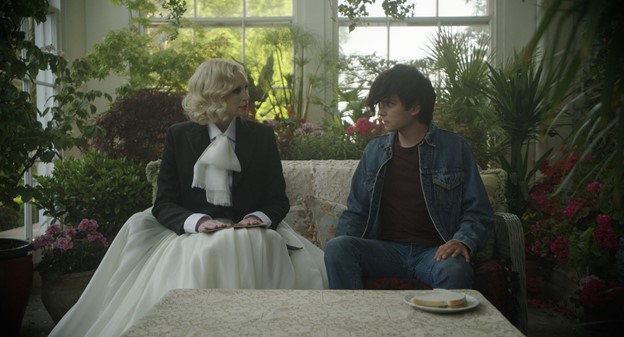 NEW YORK, NEW YORK (July 8, 2021) – IFC Films, Bankside Films, and Head Gear/Metrol Technology have wrapped production on Peter Strickland’s latest film, FLUX GOURMET. The film will be released with IFC Films across North America, who have previously collaborated with Strickland on his explosive English-language debut BERBERIAN SOUND STUDIO (2012) and follow-up feature THE DUKE OF BURGUNDY (2014), which both earned critical acclaim upon release and have subsequently garnered a fiercely loyal cult following leading up to his most recent film IN FABRIC (2018).

SYNOPSIS: At an institute devoted to culinary and alimentary performance, a collective finds themselves embroiled in power struggles, artistic vendettas and gastrointestinal disorders.

Director Peter Strickland said, “FLUX GOURMET came about through a personal frustration with how alimentary disorders or food allergies have been comically portrayed in some films, and without wanting to embark on a finger-wagging mission, I wanted to write something devoted to the disruptions of the stomach whilst attempting to maintain a degree of dignity to deeply private and embarrassing symptoms.”

IFC Films President Arianna Bocco added, “Peter Strickland’s films are unmistakable in their visual style and brilliant narratives and he consistently confronts audiences in a way that challenges and rewards each time.  We are thrilled to continue to work with such a singular talent as Peter, and to partner with Bankside Films and the incredible filmmaking team who worked so hard to get this film off the ground.”

Stephen Kelliher and Sophie Green of Bankside Films added, “Following IN FABRIC, we are thrilled to be continuing our relationship with Peter Strickland, one the most original and commanding voices in cinema today. We couldn’t be happier to partner with IFC Films on this film from its very inception and to be working with them as financiers and executive producers on the project.”

Founded in London in 2007, Bankside Films is a leading international sales company providing worldwide distribution, executive producing and financing services to independent producers globally. The company also manages an in-house development and production slate, originating its own projects as well as partnering with filmmakers to commission and develop new material. Bankside Films also enjoys a close relationship with its sister company, Head Gear Films, a leading financier of global content whilst maintaining relationships with a broad range of international financiers. The company is driven by a passion for storytelling which challenges the status quo.

Bankside Films prides itself on working with unique and distinctive cinematic voices capable of delivering exciting new stories for worldwide audiences. Emerging filmmakers are intrinsic to the company’s ethos and we continue to champion them whilst remaining a key partner for more established directors and producers.

Recent successes include BELLE by Amma Asante, sold globally to Searchlight Pictures, CARGO by Yolanda Ramke and Ben Howling, sold globally to Netflix, Sundance title THE HOLE IN THE GROUND by first time director Lee Cronin, which has been acquired by A24 in the US, ORDINARY LOVE by Glenn Leyburn and Lisa Barros D’Sa, sold internationally to Focus Features and domestically to Bleecker Street, IN FABRIC by Peter Strickland, sold domestically to A24, ETERNAL BEAUTY written and directed by Craig Roberts and starring Sally Hawkins and WOLF written and directed by Nathalie Biancheri and starring George MacKay and Lily Rose Depp which sold to Focus Features globally.

In the documentary space, the company is drawn to broad appeal, human stories which can perform in the traditional theatrical space as well as on worldwide streaming services. Our approach to selling documentaries mirror that of fictional features and our relationships with buyers of documentary films are second to none.