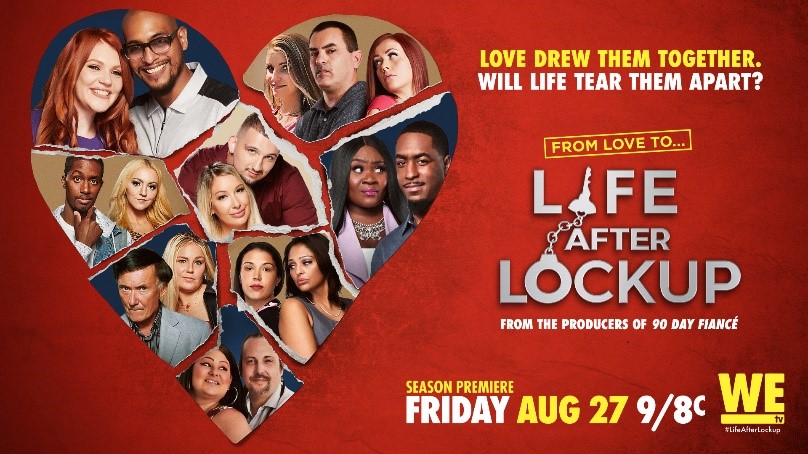 NEW YORK, NY – July 29th, 2021 — The third season of WE tv’s smash hit docuseries “Life After Lockup” returns with 16 new episodes on Friday, August 27 at 9 PM ET/ 8 PM CT. The insanely addicting series follows 10 former inmates and their significant others from the hit series Love After Lockup, through their weird and wild journey to survive the real world together.

This season, viewers will be shocked to see which couples make it outside the prison walls and committing to their relationships. However, none of it will be easy because they must fight the temptations of the outside world while also learning to adapt to their new normal.

Couples this season include:

While Marcelino and Brittany move into their dream home with enough space for all the kids and dogs, Brittany makes plans to open a halfway house and become a peer counselor. Brittany’s business dreams lead her back into the life with other ex-felons. Will her choices lead her back on the dangerous path, and bust their budget…and their marriage?

As the breadwinner of the family, Lacey’s income has taken a hit since giving birth to Summer. Then Shane quits his job to help with the kids, but when he dodges daddy duty and disappears all day, he may be keeping relationships – both in person and on social media – from Lacey. When those secrets get revealed, both Shane and Lacey revert to old habits that test their union and may challenge their happily ever after.

As Daonte and Nicolle continue to work on their relationship, Nicolle also reconnects with her prison girlfriend, Tia, behind Daonte’s back, or so she thinks. Nicolle tries to maintain relationships with both, but how long will that last? When will Daonte say, enough is enough? Or will he?

After a bumpy start to their relationship, Lisa and Stan try their best to make it work. Lisa doubts Stan’s financial status and sometimes it seems the only thing keeping them together is their kinky adventures in the basement. Lisa and Stan both have secrets they are keeping from one another, but will a catfish expose everything?

Britney doesn’t allow Ray a moment to breathe and enjoy his newfound freedom, demanding that he must get a job, propose and give her a baby as soon as possible. Will Ray buckle under the pressure? Will Britney get the wedding she’s always dreamed of? And will Ray live up to her high expectations?

While Shawn was pursuing Destinie, he was also communicating with another inmate, Sara. This time, Shawn believes Sara is the one and is ready to give up everything, including his family and career in pursuit of true love. Sara’s release date is fast approaching, but Shawn worries the same lies he told Destinie will catch up to him once again…and Sara has secrets of her own. Destinie has not stopped contacting Shawn and with her release imminent, can Shawn juggle both women?

After their messy break up, Puppy goes MIA and Amber is fearful that she relapsed or found herself back behind bars. She takes it upon herself to find Puppy, but will Amber like what she finds? Meanwhile, the two get serious with new boyfriends, however, their beaus have been previously incarcerated for crimes similar to Amber and Puppy. Can all four cons stay out of trouble or will the temptation of easy money become too great?

John promises Kristianna the Christian wedding she’s always dreamed of, and this time Kristianna searches for the perfect venue (not John’s pickup truck) and the perfect dress (one that fits). Can John let Kristianna take the reins and not make this wedding about him? With the pressures of a wedding ahead and a damaged relationship with her sister Terra, will she come to spoil their wedded bliss or finally stay out of her and John’s relationship? When the wedding day comes, Kristianna’s past comes back to haunt her – will she wind up a runaway bride?