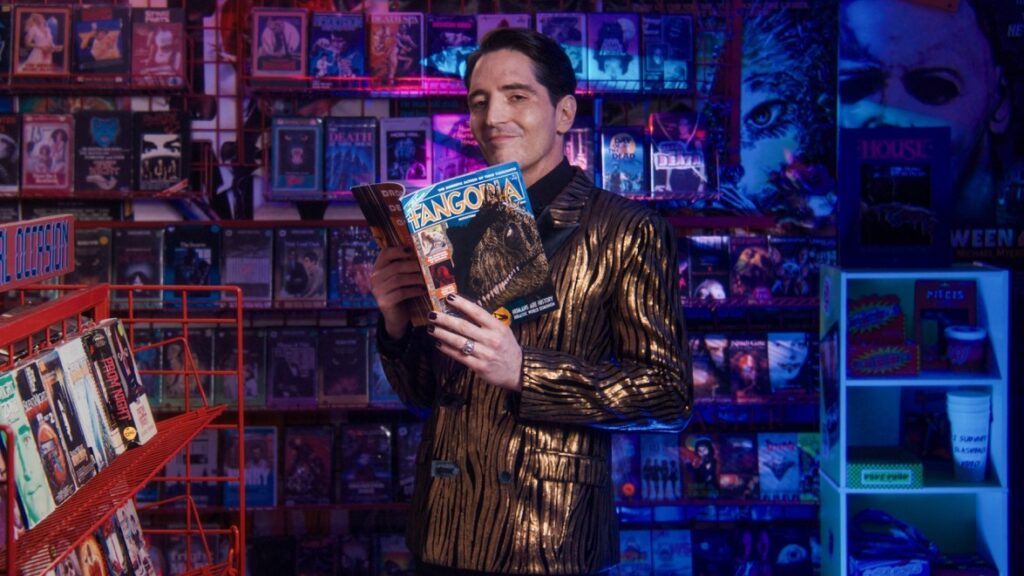 Presenters Include Harvey Guillén (What We Do in the Shadows), Bryan Fuller (Hannibal), Rachel True (Horror Noire) & Many More

The ceremony, which recognizes outstanding achievements in horror film and television, will once again be hosted by actor and writer David Dastmalchian (Dune, The Suicide Squad), and will feature Dee Wallace, Joe Lo Truglio, Joe Dante, Tracie Thoms, Jim Cummings, Rachel True and the directing team known as Radio Silence (Ready or Not, Scream) among its presenters. (See below for the full presenters list.)  This year’s nominees include Candyman, Last Night in Soho, Titane, Chucky, and Midnight Mass. The special is produced by Armen Aghaeian, produced and directed by Ama Lea, and written by Michael Varrati. Executive Producers are Tara Ansley, Abhi Goel, and Phil Nobile Jr.

“Last year’s Chainsaw Awards were not only a highlight of the year in horror, but a testimony to the very spirit of the genre, as ingenuity and resourcefulness won out over the challenges of production during lockdown,” said Fango editor Phil Nobile Jr. “We’ve upped the ante this year and added some new categories, and we’re excited for fans to tune in to once again celebrate an amazing year for horror and its fans.”

“Shudder is proud to once again join forces with FANGORIA to celebrate the best in horror, as voted on by the horror community itself,” said Shudder General Manager Craig Engler.

This year’s ceremony will premiere Sunday, May 15 at 7pm ET on Shudder TV, Shudder’s in-app programming feed, with additional pre and post shows streaming via Fango’s social media accounts. The Awards will be made available on demand on Shudder across all platforms, partners and territories beginning Monday, May 16.

Since 1992, the Chainsaw Awards have honored top achievements in the horror genre, with past recipients including Wes Craven, George A. Romero, Lupita Nyong’o, Anthony Hopkins, and Elisabeth Moss.

Since 1979, FANGORIA has been “First In Fright.” At one point the only place on newsstands where fans could read about the world of horror, today Fango has adapted to a world it helped create – one in which Fango’s early readers are winning Oscars for their contributions to, and expansion of, the genre. In 2020 FANGORIA was acquired by producer Tara Ansley and serial entrepreneur Abhi Goel, and this year the brand will expand (along with resurrected sister brands STARLOG and GOREZONE) into the digital space, where it will thrive as an iconic genre media destination.

FANGORIA’s current mission is to honor its legacy through expansion into original film and TV production, podcasts, gaming and more. Now in its 42nd year, Fango celebrates a massive and diverse community of creators and fans, and is at the forefront of the current moment of celebrating genre as a legitimate entertainment space – one in which all are welcome. When it comes to horror, everyone screams in the same language.

FANGORIA Studios was launched in January 2021 to develop and produce film, television and podcasts using the iconic FANGORIA, STARLOG and GOREZONE brands.

AMC Networks’ Shudder is a premium streaming video service, super-serving members with the best selection in genre entertainment, covering horror, thrillers and the supernatural. Shudder’s expanding library of film, TV series, and originals is available on most streaming devices in the US, Canada, the UK, Ireland, Germany, Australia and New Zealand.

David Dastmachian is an actor and writer for film, television and theater. As an actor, David has appeared in films like Ant-Man, The Dark Knight, Blade Runner 2049, and Dune, and will be seen in the upcoming films Oppenheimer, The Last Voyage of the Demeter, and Boston Strangler. He wrote and starred in the feature films Animals (Winner of the Special Jury Prize for Courage in Storytelling at SXSW ‘14) and All Creatures Here Below, and authored the hit comic book series Count Crowley: Amateur Midnight Monster Hunter from Dark Horse. He lives in Los Angeles with his wife and two children.